There was very little to move the BDC common stock market sector in the week ended September 6, 2019. No BDC reported earnings and the news flow was pretty weak.

The biggest development was that Golub Capital (GBDC) – after what seemed an eternity – received shareholder approval to merge with its non-traded BDC sister company: Golub Capital Investment Corporation.

We covered the merger on our Twitter feed, but the approval of shareholders of the combination was not controversial and expected. In fact, 96% of shareholders voted in favor of a bigger, better GBDC.
We’ll be paying more attention at the time of the IIIQ 2019 results when the larger balance sheet and income statement will be first revealed.
Credit quality and EPS are predicted to remain the same – or even get a little better – so if there’s any deviation from that promise, that will be news.

Judging by the investment assets being combined and the track record of the external manager, we’d be surprised if there were any disappointments up ahead.

Otherwise, a couple of related BDCs (PennantPark Floating Rate – PFLT – and PennantPark -PNNT) announced monthly and quarterly dividends that were unchanged from prior periods, and as expected. (The credit troubles at the PennantPark BDCs that have hammered their stock price has not yet translated into affecting their distribution levels).

MRCC’s $0.35 quarterly dividend has been the same now for 23 quarters.

All this activity is chronicled in the BDC Reporter’s Dividend Outlook Table for readers who want to review the big picture.

In fact, the potentially biggest story of the week happened away from the markets at the SEC where a BDC lobbying group continued to demand change on the Acquired Funds Fees and Expenses (AFFE) rules.

This is a controversy that dates back to 2016 and caused many mutual funds and indexes to drop BDCs from their investment portfolios.
It’s really just a matter of presentation of expenses data, but has a huge import for institutional participation in the sector say the proponents of change.

AFFE rules require investment companies and mutual funds investing in BDCs, which are a source of initial capital for small and medium companies, to include an additional line of expenses outlining the fees and operating costs charged by the BDC.

Though the SEC has argued that the requirement helps improve transparency in the market, BDCs have said it distorts expense ratios making them prohibitively expensive for a number of institutional investors that could have otherwise been attracted by the vehicles’ high dividend yields.

Remarkably, this issue has been bouncing around for years and this week a BDC-lobbying group called the Coalition for Business Development (“CBD”) put forward its own proposal to the SEC to break the logjam.

In its letter to the SEC, the CBD proposed that a BDC should be treated no differently than an investment in an operating company and that a BDC’s expenses should be included in a Statement of Additional Information (SAI) disclosure.

Under the CBD’s alternative proposal, a SAI disclosure would detail the BDC’s operating expenses. Any costs would be factored into the BDC’s trading price. The argument is that any expenses would be reflected in the fund’s total return.

The CBD said that within such a model it would no longer be necessary for the BDCs to be reported within a prospectus fee table and remove distortions in the expense’s ratio of an acquiring fund.

There’s no resolution on the immediate horizon, but analysts and pundits have previously contended that a favorable resolution to the AFFE rules would enlarge the BDC investor base; increase prices and improve corporate governance.

Given that markets tend to run ahead of expected news, the promise of a positive change to AFFE may be supporting BDC prices.

We’ll report back next time we hear anything material, but this subject has been in the BDC ether for many, many quarters so handicapping the timing of a resolution is well nigh impossible for those of us outside of the governmental beltway.

So, with not much in the way of news, BDC sector prices were mostly influenced by the upward trend in the broader markets.

The BDC sector – as measured by the UBS Exchange Traded Note which includes most of the public funds – with the ticker BDCS was up 0.28%.

As to the rest of our regular metrics: Two thirds (30 of 46) of individual stock prices were up or flat and one third (16) were down. Three BDCs went up 3.0% or more in price on the week.

One was OHA Investment (OHAI), up 5.4%, as investors sharpen their pencils about the impending acquisition/merger into Portman Ridge Financial (PTMN). For what it’s worth PTMN was down (2.5%) this week.

There’s no obvious reason why.FSK has been out of favor – despite its late 2018 merger with KKR-managed CCT Capital – from February 2017.

As this lifetime chart for FSK shows, the BDC fell out of favor back in February 2017 after reporting losses and in anticipation of a dividend cut that came shortly after. 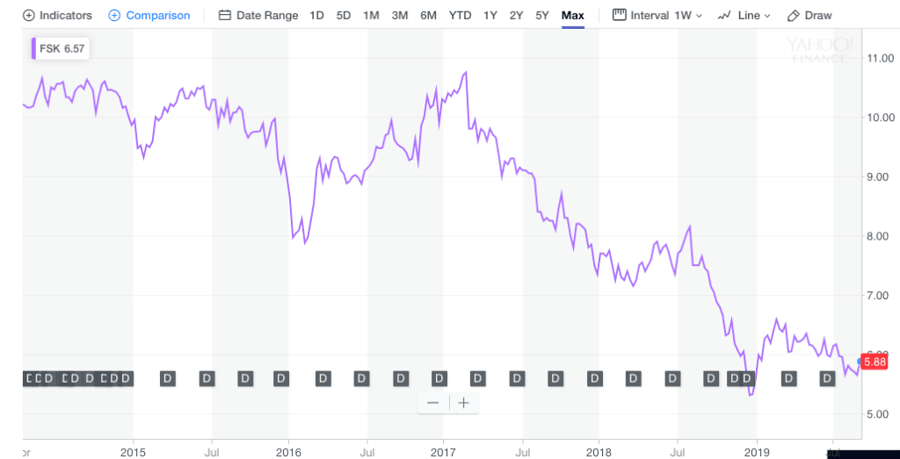 In those two and a half intervening years, FSK has dropped 45% in price.

Since August 7, when FSK reached a low of $5.47, the stock is up 7.5%.The beginning of a price turnaround or just a blip before a further descent ?

Impossible to say, but at $5.88 FSK trades at 7.7x projected 2020 Net Investment Income Per Share and at a (25%) discount to book, and yields 12.9%. Those metrics suggest investors believe a dividend cut is on the cards.
Should that not occur and the dividend remain stable and investor concerns wane and FSK trade at a more normal 10x multiple, the price could go to $7.6, a 29% increase over the current level.

Yet another reminder of both the wide variance in BDC prices depending on financial outcomes and how difficult it is for investors to guess right as that two and a half year downward slope illustrates.

Speaking of the difficulty of guessing right, Medley Capital (MCC) was up 3.5% as investors try to position themselves for what might happen next.

There were no new developments in the Medley saga this week as Houlihan Lokey continues to shop the BDC to prospective buyers, while Sierra Income and Medley Management (MDLY) wait to hear the outcome.
We believe the most likely outcome – and we’re spit-balling here – is that MCC’s management contract gets sold to a third party asset manager or the BDC gets acquired at a price between $3.5-$4.5 a share. Separately Sierra and MDLY will merge, with the former becoming a public BDC.

That’s all speculation at this point but by the end of the month the outline of the final deal will be known and the BDC Reporter will have to find a new regular topic to update our readers on.

There were no BDCs dropping 3.0% or more in price this week. We did note, though, that the number of BDCs trading within 5% of their 52 week lows decreased by one, going from 4 to 3.

At the top end of the table, there are now 8 BDCs trading within 5% of their 52 week highs versus 6 the week before.

Still, we’re not making too much of this short term data.

The market remains in a state of limbo that’s been underway for months.

All this – and other data we look at – suggests a BDC sector that is neither fish nor fowl; not rallying and not dropping, caught in purgatory.