Macro economic factors — tariffs on Chinese goods, political unrest in Hong Kong and Brexit among them — have returned volatility to capital markets, however direct lending has plowed onward with few upsets.

One way to gauge the health of this opaque space is the non-accrual rate within BDC portfolios since the bulk of their investments are focused in this area. The rate for 2Q19 debt investments stands at just 1.6%, down from 2.4% in the year ago period. Those rates are culled from $78 billion of first-lien, second-lien and unitranche loans (cost basis) among 95 BDCs compiled by Advantage Data. 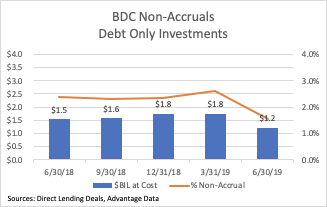 Sure, some portfolios have experienced more pain than others, but on the whole, the rate remains well under the historical range of 3% to 5%, analysts say. Even if more credits were to crater in the second half of 2019, there’s enough cushion to keep nerves calm for awhile. The time to worry is when the rate revisits norms. An increase to 3.5% would start to raise eyebrows, one analyst told Direct Lending Deals.

What will third-quarter results look like in terms of non-accruals? Flat, to a hair higher, based on the amount of sub-80 investments on the books. The same sample provided by Advantage Data shows that 3.9% of outstanding 1L, 2L and unitranche investments are marked below 80, a distressed marker, up from 3.7% a year ago. About a third have non-accrual status already.

Of course, non-accruals don’t show the whole picture. There can be problems at issuers long before they are marked down. Reputations are at stake and BDC managers are paid on book value, so they are incentivized to fix the potholes. In particular, BDCs with private equity backing think they can turn around the business, and have the money, expertise and staff to do so. They can convert debt to equity and wait for a sale of the issuer. Some restructurings succeed, others fail.

There is no formal data available on the number of bad credits that come back from the brink, but market players said they believe that roughly two-thirds or more of distressed credits end up written off entirely. —Kelly Thompson

********Coming soon! Direct Lending Deals is a new publication that lifts the curtain on private credit by giving investors and originators the latest news and analysis on terms & trends in the direct lending market, now a $1 trillion dollar asset class. DL Deals focuses on sponsor-driven transactions, the main engine of deal flow in leveraged lending. We tap into 20-year relationships to go deeper on deals, and cover all segments of direct lending including fundraising, BDCs and people shaping the market. Contact kelly.thompson@dldeals.com to join the DL Deals distribution list. Website and formal launch coming next month.********