Portfolio action was light again this week, with six issuers emerging — all with opportunistic business — up from four the week prior that included some M&A in the mix. With little lining the forward M&A calendar, arrangers are reviving repricing activity, which has ebbed amid a leveling off of spreads. Last month, repricings totaled $18.3 billion, the lowest monthly total of 2017, according to LevFin Insights.

BDC portfolio managers should keep a close eye on Press Ganey, which this week launched a rare second-lien repricing. Should a trend catch fire, managers will face a repricing attack from another direction — on the very paper they have turned to offset falling first-lien yields. Currently, second-liens account for $15.8 billion, or 21% of all BDC debt investments, according to Advantage Data. Among the second-liens, 60% carry a spread of L+900 or higher, well above today's L+801 average, according to LFI, and 25% are bid north of par (see download to view 2L issuers by spread distribution provided by Advantage Data). 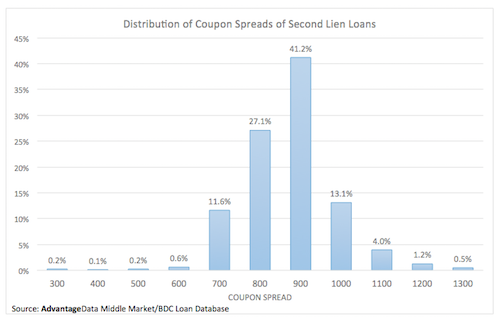 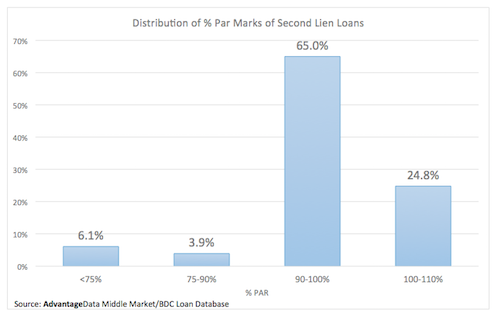 Despite what’s been a hot year for repricings—year to date volume has surged to $444.4 billion, according to LFI—second-liens haven’t been in the mix for a couple of obvious reasons.

The typical 102, 101 hard call protection generally makes such a trade unattractive for the issuer. While spreads for first- and second-lien loans have tightened appreciably over the past 12 months— second-lien yields, in particular, have tightened to 9.92% from a recent peak of 11.81% in December 2016, according to LFI—the interest savings would need to be substantial in order for the transaction to make economic sense if the deal triggers the hard call at 101, and nearly impossible at 102.  The average repricing year-to-date has shaved 65 bps, so waiting for call protection to roll off looms more attractive. 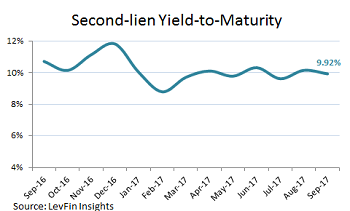 And though some issuers have opted to pay out the 101 on first-lien repricings, those transactions are the exception rather than the rule.

Indeed, issuers have focused on refinancing second-liens outright, especially given the accommodating first-lien market that’s open for opportunistic transactions while arrangers seek to rebuild the M&A pipeline. So far this year, 33 issuers have tapped the first-lien market raising $4 billion to refinance second-liens. And the just-ended third quarter, with 11 transactions for $1.69 billion, was the busiest stretch since the fourth quarter of 2016 when LFI tracked 12 issuers placing first-lien term debt to redeem roughly $1.84 billion of second-liens.

B3/B Press Ganey plans on splitting the difference, as an arranger group led by Credit Suisse and Citi layers in $88 million of additional first-lien term debt to refinance a portion of the issuer’s $268 million second-lien term loan as both loans are repriced. While the 101 payout creates friction for the issuer as it attempts to lower second-lien margin to L+675, from L+725, that cost is offset in part by the more drastic cost savings on the $88 million of risk that’s moving to the first-lien loan, which would see a more modest margin reduction, to L+300, from L+325.

What makes Press Ganey all the more unusual, however, is that it’s the sole straight second-lien repricing of the year. NEP Group won a big pricing reduction on its $105 million second-lien to L+700 with a 1% floor, from L+875 with a 1.25% floor via a cross-border extension that also included a $50 million paydown via an add-on to its first-lien debt. Asurion took that same route, accomplished its margin reduction to L+600, from L+750 in the context of kicking out maturity, and a reduction to $1.8 billion from $2.15 billion, again, via additional first-lien debt.

If Press Ganey proves to be successful—we’ll know after the Oct. 18 deadline—there’s at least some potential for follow-on activity. The big downdraft in second-lien yields came early in 2017, falling as low 8.78% in February, from December’s 11.81%, which is the highest level since LFI commenced tracking this data last year. That likely leaves a solid pool of of potential candidates among well-regarded issuers, even though syndicated second-lien activity fell dramatically in 2015 and 2016, and the refinancing activity outlined above has culled the herd a bit.

Optionality is another factor that comes into play here. As call protection falls away, financial sponsors may be likely to relever a business and take a dividend.

Nevertheless, data tracked by Dealogic offers some perspective around the potential second-lien repricer universe.  A strong run of deals in 2013 ($33.5 billion from 174 issuers) and 2014 ($39.7 billion from 207 issuers), leaves a collection of issuers whose call protection has run off and are more than likely candidates for full refinancing, assuming they haven’t done so already. More recently, volume has fallen amid a shift to privately placed second-lien paper as these deals became harder to sell, though 2015 issuers ($17 billion from 101 issuers), and those deals done in 2016 ($14.4 billion from 82 issuers), may potentially be suitable repricing candidates.

Another measure: 45% of the $47 billion of second-lien loans in the Credit Suisse Leveraged Loan Index are bid north of par; by number, that par-plus share is 38% of the 181 names in the Index.

Of course, given second-lien loans’ strong call protection relative to the rest of the loan market, that’s likely to include most or all of 2017 deals, nearly all of them callable at 102.