Abbot Laboratories (NYSE:ABT) saw a series of bond issues downgraded this past week from A2 to Baa3. This rating downgrade follows the aquisition of St Jude Medical Inc. (NYSE:STJ) on January 4th and the concerns that Abbott will struggle with deleveraging in the future. Since the acquisition and downgrade, ADI's CDS screener has shown Abbott Laboratories 5Y Sen USD XR14 CDS (green)  drop and then widen to 62 Basis Points. Over the same period, ABT's equity (grey) had been on the rise until a drop yesterday. 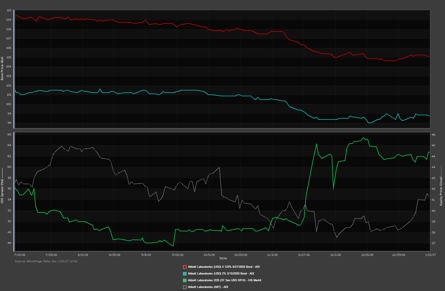 Monitor the movement of Abbott and other downgraded securities by requesting a free trial of AdvantageData today.