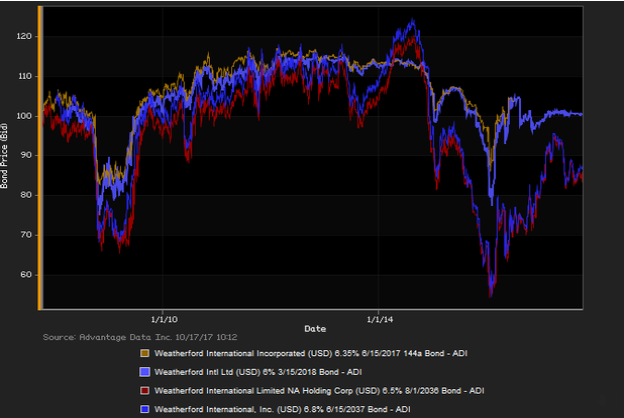 An overall wait-and-see mode kept prices collimated in fairly thin bands for many European corporate bonds. The market dynamic carried elements of the previous session, although with a fresh array of market forces in push-pull countering moves. As cited above, a jump in U.K. inflation countered the effect of disappointing ZEW confidence out of Germany. As pricing power (inflation) touched the highest levels in about 5 1/2 years, BOE governor Mark Carney indicated the Bank of England  may be very near implementing a lending-rate increase: "... having seen some evidence of building domestic pressures, the judgment of the majority of the committee is some raise in interest rates over the coming months may be appropriate."  Meanwhile early oil prices continued to hover around $52, supporting some gains in the oil-and gas group, countering to a degree the risk-off bias attending continued political risk amid Catalonians' push for independence from Spain. High-yield bonds edged out investment-grade debtin net prices, as of 4 PM, London time. Among European high-yield bonds showing a concurrence of top price gains at appreciable volumes traded, Deutsche Bank AG 4.5% 4/1/2025 made some analysts' 'Conviction Buy' lists. (See the chart for Weatherford International bonds, above.)   M. F. Brown