With the secondary market bouncing from December’s lows, loan arrangers garnered the first critical signs of success after a tentative start to the year, potentially emboldening them to launch a more substantial calendar of business in the coming days. Targa Resources reopened the high-yield new-issue market following a two-months-long drought as that market also logged significant gains in the early days of 2019, with the rally fading in the latter part of the week.

The loan primary, meanwhile, got off to a slow start with December’s heavy losses not too far in the rearview mirror. Through the first eight days of 2019, arrangers launched a mere nine transactions for $6.65 billion, which is down from 26 transactions representing $22 billion of gross volume in the first eight days of 2018. That’s a 70% drop in volume compared with the same period last year.

There’s more going on behind the scenes, however, with arrangers premarketing other transactions and plenty of business to roll out in the New Year, with LFI’s forward calendar at $55.9 billion and the “net net” calendar at a healthy $35.2 billion. 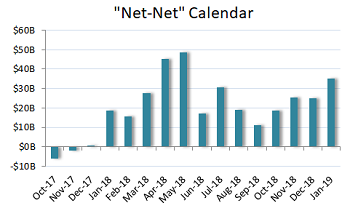 J.P. Morgan set talk of L+425-450 with a 0% floor and a 98-98.5 offer price on the $350 million term loan B backing Advent International’s acquisition of a majority stake inAimbridge Hospitality from Lee Equity Partners and General Atlantic, sources said. The seven-year covenant-lite term loan would include six months of 101 soft call protection. Leverage is 5x first-lien and 6.4x through $100 million of privately placed second-lien debt, based on $70.2 million of EBITDA, sources said. Commitments are due at noon ET Wednesday, Jan. 23. Financing also includes a $60 million, five-year revolver with a springing leverage test. Advent and management are kicking in a combined $341 million of equity to fund the acquisition, which is expected to close by February. Holders of the company’s existing unitranche debt (L+500) due June 2022 include Bain Capital Specialty Finance with $29.9M in principal amount, Golub Capital BDC with $15.6M and Golub Capital Investment Corp. with $12.4M.

Antares Capital and Golub Capital set talk of L+425 with a 1% floor and a 99 offer price on the $345 million add-on first-lien financing for Edgewood Partners Insurance Center, sources said. The financing, which backs the acquisition of Integro USA, includes a $295 million term loan that would be fungible with a $514 million first-lien term loan due September 2024 (L+425), and a $50 million delayed-draw term loan sources said. Proceeds also would repay revolver borrowings. Note that the delayed-draw tranche is available for 24 months, with a 1% ticking fee. Commitments are due Tuesday, Jan. 22. The company, also known as EPIC Insurance Brokers & Consultants, initially issued the privately placed first-lien term loan as a club deal, at L+475. Solar Senior Capital holds $13.3M of the existing 1L debt due September 2024, which has since stepped down to L+425.

Barclays and Golub Capital launched a $365 million incremental first-lien term loan for Radiology Partners, setting a lender call for 11:30 a.m. ET Wednesday, Jan. 16, according to sources. Proceeds would be used to fund the acquisition of Austin Radiological Association and to repay revolver borrowings from the acquisition of Desert Radiology. The issuer’s existing covenant-lite first-lien term loan due July 2025 (L+425), for reference, was quoted at 98–99.5 before the launch of the incremental loan, sources said, yielding approximately 7.66% to maturity. The originally $680 million first-lien term loan and a $315 million second-lien term loan strip due 2026 (L+725) were issued in June to refinance debt. The deal cleared with a 24-month sunset on 50 bps of MFN protection following some investor-friendly revisions to documentation, including dropping proposed pre-cap language from the transaction, sources said at the time. Unlimited first-lien debt is available up to 5x net first-lien leverage, with junior/unsecured debt up to 6.75x net leverage. Leverage pro forma for the refinancing was 5/6.9x. Holders of the existing 1L debt include Flat Rock Capital Corp. with $2M in principal amount, Audax Credit BDC with $4M and Solar Senior Capital with $7.5M. Golub Capital BDC holds equity valued at $239,000. – Thomas Dunford