In loans, volume remains limited: seven launches offered just $7.2 billion of new volume, and $3.5 billion on a net basis. A pair of M&A transactions accounted for $3 billion, but without much M&A on the launch pad, arrangers turned to opportunistic business, with four transactions generating $2.4 billion of volume.

The week’s flex ratio, seven deals tightening against three moving wider, is illustrative of the bifurcated market, where the best-regarded deals build demand quickly, but it’s also a bit misleading as the stat doesn’t capture multiple pricing moves, such as Monotype Imaging, or transactions that are being retooled, or more than one round of documentation changes for that matter. Moreover, most of the week’s downward moves were limited to tightening OIDs, while deals going wider offered far more extensive changes. 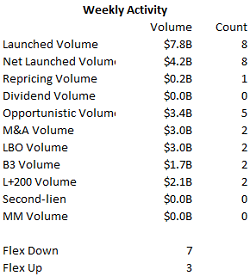 Antares Capital and Golub Capital set price talk of 99.03 on the $140 million add-on first-lien term loan for Edgewood Partners Holdings. The incremental debt would be fungible with the issuer’s approximately $819 million covenant-lite first-lien term loan due September 2024, which is priced at L+425, with a 1% floor. Proceeds, along with funding under the existing $99 million first-lien and $50 million second-lien delayed-draw term loans, as well as an incremental $35 million second-lien term loan, will be used to finance an acquisition. Commitments are due Wednesday, Oct. 30. Solar Senior Capital holds $15.8M in principal amount of the existing 1L debt. AB Private Credit Investors holds $3.1M of funded 1L debt along with a delayed-draw component.

Investors received allocations of GoodRx’s $155 million add-on first-lien term loan (L+300, 0% floor), which was issued at 99.75. Goldman Sachs was left lead on the deal, which priced tight to talk. Proceeds, along with cash on hand, would be used to refinance the issuer’s $200 million second-lien term loan. The issuer, which runs a platform that provides information about prescription drug price comparisons and coupons at pharmacies, is owned by Silver Lake Partners, Francisco Partners, Spectrum Equity and management. Holders of the company’s existing 1L debt include Oaktree Strategic Income Corp. with $3.9M in principal amount and Oaktree Strategic Income Corp. II with roughly $2M. Holders of the existing 2L debt due October 2026 (L+750) include Oaktree Specialty Lending Corp. with $22.2M and Oaktree Strategic Income Corp. II with $1.3M.

McDermott International is offering lenders to its existing $2.23 billion term loan the opportunity to participate in $850 million of the newly issued $1.3 billion superpriority term loan due October 2021 on a pro rata basis. Administrative agent Barclays is running the transaction. The superpriority loan is priced at L+1,000. It is non-callable for six months, with a carve-out for certain asset sales, followed by 18 months of 103 hard call protection. Lenders are offered a 3.5% upfront fee on the loan; the OID would be paid at funding. The company disclosed it inked a $1.7 billion superpriority credit facility, split between a $1.3 billion term loan and a $400 million letter of credit facility. The term loan is divided into four tranches, $550 million of which is available immediately (as well as $100 million of the LC facility) and three tranches sized at $250 million, $150 million and $350 million that become available at later dates subject to the company satisfying certain conditions. Holders of the company’s existing 1L debt due May 2025 (L+500) include Business Development Corp. of America with $9.9M in principal amount and Oaktree Strategic Income Corp. with $1.3M.