Although a pair of competing industry conferences took many buysiders out of pocket in the first part of last week, high-yield activity roared back to life late in the week via a procession of drive-bys, while loan arrangers launched a trio of large LBO deals off the pipeline as the secondary market continued to move higher. Several secondary situations also kept market participants on their toes, what with Windstream Services filing for bankruptcy, Neiman Marcus disclosing the framework of an extension/exchange plan and issuers releasing a flurry of earnings reports.

The marquee LBO deals for Power Solutions and Travelport, along with ConvergeOne’s relaunch, accounted for $8.1 billion of the $9.3 billion of loans launched to market this week via 10 issuers. Given the LBO/M&A focus, it isn’t surprising that eight of the week’s new deals were from B3-rated issuers, accounting for $4.9 billion of volume.

Despite the rollout of these jumbo deals, new-issue loans continue to present something of a mixed message. Investors are well-aware that there is no meaningful backlog of loan activity, and other technical factors are coming into alignment. Yet, last week’s activity suggests that accounts continue to play defense on credit. That may become more difficult in the face of the shrinking calendar. 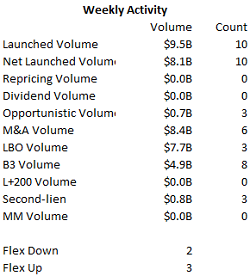 A Bank of America Merrill Lynch-led arranger group went out with a reverse-flex on the $200 million incremental term loan for Equinox, shifting the deal to a fungible add-on to the existing term loan due March 2024 (L+300). The incremental debt is offered at 98.8. By comparison, the loan launched as a standalone seven-year tranche talked at L+375-400, with a 0% floor and a 99 OID. The proposed fungible add-on would yield about 6.04% to maturity at the proposed 98.8 OID, versus 6.72%-6.92% as originally launched to market. The high-end fitness club operator plans to use proceeds to support new club growth, investments in strategic initiatives and general corporate purposes. The issuer is offering to reset the 101 soft call protection for six months on the entire tranche, which will grow to about $986 million pro forma for the add-on. BAML, Morgan Stanley, City National Bank, Citigroup, J.P. Morgan and Goldman Sachs are running the transaction. Commitments are due by noon ET Thursday, March 7. OHA Investment Corp. holds $7M in principal amount of the company’s 2L debt (L+700) due September 2024.

Investors received allocations of the $75 million incremental term loan for Janus International (L+450), which opened at 98.75–99.25, from issuance at 98.5. UBS was left lead on the deal, which priced in line with talk. Proceeds will be used to fund several tuck-in acquisitions. Clearlake Capital-controlled Janus makes doors for the self-storage industry. Prospect Capital holds $20M of the company’s 2L debt (L+775) due February 2026.

Investors received allocations of the $200 million incremental TLB-5 for Neustar (L+450), which broke to a 98–98.5 market, from issuance at 98. Bank of America Merrill Lynch was left lead on the deal, which priced wide of original talk. Proceeds will be used to refinance its TLB-3 (L+250) ahead of its January 2020 maturity and for general corporate purposes. Triton Pacific Investment Corp. holds $750,000 in principal amount of the company’s 2L debt (L+800) due February 2025.

Macquarie set a 98.75-area offer price on the $106 million fungible add-on to Spring Education Group's first-lien term loan due 2025 (L+425). Proceeds from the transaction will be used to finance the acquisition of five undisclosed schools. Commitments are due on Thursday, March 7. Spring Education was formed by Primavera Capital Group through a series of acquisitions and currently consists of Stratford Schools, as well as Nobel Learning Communities and the southern California schools of LePort Montessori. The company remains the largest pure-play, private pre-K–12 education platform in the U.S., with 237 schools across 18 states and Washington, D.C. Audax Credit BDC holds $1M of the existing 1L debt.

Citi this morning set price talk of L+275-300 and an OID of 99.5 for Windstream’s $500 million term loan DIP financing, according to sources. Commitments are due by noon ET Wednesday, March 6. The superpriority covenant-lite loan would have a 24-month maturity with six months of 101 soft call protection and at par thereafter. Proceeds will be used for general corporate purposes, adequate protection payments and restructuring expenses, and otherwise fund the telecommunications company’s open-ended chapter 11 cases. The two-year $1 billion DIP financing includes a $500 million revolver. Interim availability on the term loan is $300 million, while $100 million is available on the revolver. Arrangers include Citi, J.P. Morgan, Credit Suisse, Goldman Sachs, Barclays and Deutsche Bank, with Citi as administrative agent. Oaktree Strategic Income Corp. holds $7.4M in principal amount of the company’s prepetition 1L debt (L+400) due March 2021, and Oaktree Specialty Lending Corp. holds $5M of its 8.625% senior notes due October 2025.