Add-ons abound amid renewed wave of M&A; Autodata deal to take out debt held by PSEC

The average bid price of the Credit Suisse Leveraged Loan Index cooled a modest, but tangible, 27 bps over the four days ended May 9, which represents 18% of the 151 bps increase posted during the month of April. 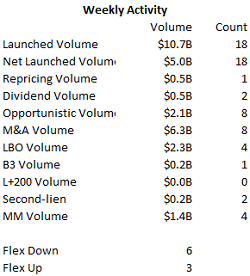 RBC Capital Markets, KKR Capital Markets and SunTrust Robinson Humphrey launched a first-lien loan financing backing Thoma Bravo’s purchase of Autodata Solutionsfrom KKR-controlled Internet Brands. A lender meeting is scheduled for 1 p.m. ET Wednesday, May 15. The arrangers are syndicating a $375 million seven-year first-lien term loan and a $40 million revolver. A $175 million eight-year second-lien term loan has been placed privately. Autodata last tapped the market in late 2017 with a dividend recapitalization, including a $280 million first-lien term loan due 2024 (L+325) and an $80 million second-lien term loan due 2025 (L+725). Proceeds financed a $360 million dividend to the KKR. RBC is the administrative agent on the loans. Prospect Capital holds $6M in principal amount of the company’s existing 1L debt.

A Credit Suisse-led arranger group launched a $250 million incremental term loan for Edgewater Generation, proceeds of which would be used to fund the acquisition of two power plants from Calpine. The incremental debt was talked at 99.5. Once funded, it would be fungible with the borrower’s existing term loan due December 2025 (L+375), which includes 101 soft call protection through June 10, 2019. Commitments are due by 5 p.m. ET Tuesday, May 14. Lenders to the issuer’s existing term loan are offered a 12.5 bps fee to consent to an adjoining amendment request to allow for the new debt. FS Energy & Power Fund holds $20M of the company’s existing 1L debt.

UBS upsized the add-on first-lien term loan for FirstLight Fiber by $15 million, to $80 million. There was no update to price talk, which is 98.6. The incremental debt would be fungible with the borrower’s existing first-lien term loan due July 2025 (L+350). As before, FirstLight is seeking a $10 million incremental second-lien term loan, which is offered at 98.3 and would be fungible with its $90 million second-lien term loan due July 2026 (L+750). Proceeds back an acquisition that had been planned for shortly after the close of Antin Infrastructure Partners’ buyout of the company last year. The planned purchase of Maine Fiber would have been funded with a delayed-draw tranche that was part of the buyout loan, but the bolt-on acquisition fell through and the delayed-draw loan was canceled. OHA Investment Corp. holds $400,000 of the existing 2L debt.

Jefferies set talk of L+325 with a 1% floor and a 98.79 offer price on the $50 million add-on term loan for Medallion Midstream. Commitments are due today. Proceeds would be available for general corporate purposes, including funding capex associated with a recently executed commercial arrangement entered with a Permian Midstream peer. The existing term loan due October 2024 (L+325, 1% floor) was recently quoted at 99.375–99.75, yielding about 6.08% to maturity at the bid price. Pro forma for the incremental debt, the loan will grow to $741.25 million. The loan is governed by a 1.1x debt service coverage test. The originally $700 million loan was issued in 2017 to back Global Infrastructure Partners’ $1.825 billion purchase of Medallion, a crude oil gathering and intra-basin transportation system in the Midland Basin, within the eastern half of the Permian Basin. The capital structure also includes a $25 million superpriority revolver. Business Development Corp. of America holds $4.4M of the existing 1L debt.

An RBC Capital Markets-led arranger group today launched a $360 million B term loan for MRO Holdings, setting a lender meeting for Wednesday, May 15. Proceeds would be used to refinance existing debt and fund a shareholder dividend. Pro forma leverage would run about 4.5x, all senior. The issuer, which is owned by the Kriete family and Caoba Capital, last tapped the market in November for a repricing that lowered the margin on its then-$223 million TLB to L+475, from L+525. The issuer reset the 101 soft call protection for six months in connection with the November repricing. MRO Holdings provides aircraft maintenance and repair services to the airline and freight carrier industries. Holders of the existing 1L debt include CION Investment Corp. with $4.4M and Flat Rock Capital Corp. with $990,000.

A Barclays led arranger group set talk of L+375 with a 0% floor and a 99 offer price on the $160 million add-on to OMNIA Partners’ first-lien term loan that will be used along with a $46 million add-on to the issuer’s privately placed second-lien term loan, to fund a sponsor dividend. The issuer will reset the first-lien term loan’s 101 soft call protection for six months. Commitments are due on Tuesday, May 14. Arrangers on the deal are Barclays, Jefferies and Fifth Third. TA Associates-backed OMNIA Partners is a group purchasing organization that provides consumable goods and services to municipalities. Oxford Square Capital Corp. holds $6M of the company’s existing 1L debt due May 2025 (L+375) and $14M of its 2L debt due May 2026 (L+750, 0% floor).

Citizens launched a $20 million incremental first-lien term loan for Octave Music Group as part of a second-lien paydown and amend-and-extend effort, according to sources. The incremental debt will be fungible with the company’s existing term loan B (L+475, 1% floor), which is extending its maturity to May 2023. Accounts are being offered a 99.5 OID and a 25 bps consent fee. The transaction will extend soft-call protection on the first-lien tranche for six months. Commitments are due Monday, May 20. In addition to proceeds from the $20 million incremental debt, Octave will use $10 million of cash on hand to further pay down the second-lien debt (L+825, 1% floor). All debt tranches will extend maturities for two years, with the second-lien tranche to come due May 2024. The second-lien debt will also carry 101 hard call protection for six months. Pro forma for the transaction, there will be $252 million of first-lien debt outstanding and $47.5 million of second-lien debt outstanding. Flat Rock Capital Corp. holds $987,000 in principal amount of the company’s existing 1L debt, while 2L holders include Solar Capital with $14M, Monroe Capital Corp. with $5M and Sierra Income with $7.5M.

Golub Capital launched a $170 million add-on first-lien term loan for Vertafore, setting a lender call for today. Proceeds will be used to fund an acquisition. Price talk is not yet available. The incremental debt will be fungible with the issuer’s existing approximately $1.6 billion covenant-lite first-lien term loan due July 2025 (L+325), which was recently quoted at 99–99.5. The existing first-lien term loan and a $665 million second-lien term loan due July 2026 (L+725) were syndicated in June 2018 to refinance debt and fund a $540 million dividend. Nomura is administrative agent. As reported, the capital structure is portable for three years following the close of the recap transaction in July 2018, subject to certain parameters including a minimum equity check of 30% and net first-lien and total leverage of 5.3x/7.6x, which was in line with marketed leverage at the time the deal was syndicated. The free-and-clear incremental facility was set at $295 million, with a 1x grower, and included a 12-month sunset on 50 bps of MFN protection.Apollo Investment Corp. holds $14.6M in principal amount of 0.5% unfunded revolver borrowings due June 2023 and $409,000 under a letter of credit, while OHA Investment Corp. holds $900,000 of the existing 2L debt and Sierra Income Corp. holds $2M in 2L debt.