High-yield extended its June rebound with increasing vigor over the past week amid retail cash inflows and declining interest rates, and the new-issue machine kept churning out maturity-extension focused refinancings, peppered by a few M&A situations. The loan secondary, by contrast, was little changed, with new issues at an ebb pre-holiday and the specter of falling rates dampening enthusiasm among end investors.

Loans at least got a technical boost with DaVita slating a roughly $3 billion paydown to its TLB with proceeds from the sale of its DaVita Medical Group unit to Optum, not to mention a few other names joining the pending repayments queue. With DaVita’s paydown, expected in early July, joining the calendar and Nexstar Broadcasting's $3.04 billion M&A loan allocating, LFI’s net net calendar slid back into the red, at negative $1.3 billion.

DaVita’s paydown is the second-largest repayment unrelated to a new issue tracked by LFI, behind only First Data, whose $7.415 billion of institutional loans are slated to be repaid in connection with Fiserv’s acquisition of the payment processor, which is expected to close in the second half of the year. 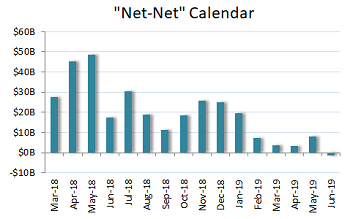 Citi and Wells Fargo launched a $250 million incremental term loan for Consolidated Container to back its acquisition of Tri State Distribution, a retail pharmaceutical packaging solutions provider. The seven-year incremental term loan is talked at L+325-350 with a 0% floor and a 99.5 offer price. The loan would include six months of 101 soft call protection. Commitments are due Thursday, June 27. Incremental facilities include a $130 million free-and-clear facility with a 1x grower, and unlimited amounts up to pro forma net first-lien leverage of 4.6x. There is a 12-month sunset on 50 bps of MFN protection. Barings BDC holds $7.4M in principal amount of the company’s existing 1L term loan due May 2024 (L+275).

Accounts have received allocations of a $50 million add-on term loan for SMB Shipping Logistics (L+400, 1% floor), which is currently quoted at 99.5-100 from issuance at 99.5. Antares Capital was sole lead arranger on the deal, which launched as a $25 million incremental term loan. The new debt will be fungible with the company’s existing $490.5 million term loan. Proceeds will be used to repay revolver borrowings and to provide cash for future tuck-in acquisitions. The transaction is expected to close on Monday, June 24. SMB, also known as Worldwide Express, is focused on providing small parcel and freight services to the small and midsize business market. The Ridgemont Equity Partners portfolio company was formed through the combination of Worldwide Express and Unishippers Holdings in 2017. Holders of the company’s 2L debt due February 2025 (L+800) include Goldman Sachs BDC with $41.7M in principal amount, Goldman Sachs Middle Market Lending Corp. with $25M and Goldman Sachs Private Middle Market Credit Corp. with $33.3M.