It was back to business last week for loans and bonds alike, with loan arrangers holding 22 lender meetings or calls to support $15.82 billion of deal flow. High-yield was similarly busy with nine credits for $3.88 billion marking the busiest post-July 4 week in several years, a testament to strong market conditions amid still-low underlying rates despite a small spike on Thursday afternoon and ongoing inflows to the asset class. An overwhelming majority was refinancing related, but new-money opportunities through M&A deals are already on tap for high-yield this week.

As the table above demonstrates, $13 billion of new loan business was announced over the past week—recall there were a flurry of deal announcements ahead of the July 4 holiday, while a handful of last week’s launches are this week's business—and while that volume is heavily weighted toward M&A coming off the pipeline, it nonetheless also includes $3.6 billion of opportunistic business as issuers seek to jump the queue and take advantage of the recent buildup of cash from repayments and quarter-end amortization.

Despite the flood of new launches, the secondary maintained a healthy tone, with BAML’s Instinct Loans electronic trading platform recording triple-digit net buying interest all five days last week. Not including an estimated $3 billion of quarter-end amortization payments, LFI tracked nearly $8 billion of repayments that were unrelated to new issues in June and a heavy pace has continued thus far in July. Though Friday, LFI tracked $5.3 billion of repayments unrelated to new issues, the largest of which was DaVita’s roughly $3 billion paydown from asset-sale proceeds. 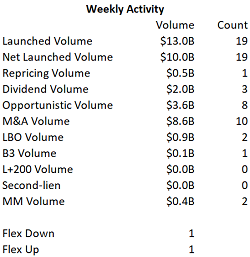 Morgan Stanley set price talk of L+325–350, with a 0% floor and a par offer price on the proposed repricing of Grocery Outlet’s approximately $475.2 million covenant-lite first-lien term loan due October 2025. The issuer is offering to reset the 101 soft call protection for six months. The current spread is L+375. Commitments are due by 5 p.m. ET Thursday, July 18. The repricing follows on the heels of the issuer’s June IPO, proceeds of which were used to fully repay its $150 million second-lien term loan (L+725) and about $248 million of the first-lien tranche. The discount grocer last month completed its IPO of about 17.2 million shares at $22 per share, which was above the initially proposed range of $15 to $17 per; the underwriters fully exercised the overallotment option for an additional 2.58 million shares, according to a company statement. Audax Credit BDC holds $2M in principal amount of the existing 1L debt. Holders of the company’s 2L debt include Apollo Investment Corp. with $10.5M, Corporate Capital Trust II with $382,000, FS Investment Corp. II with $2.3M, FS Investment Corp. III with $271,000 and FS KKR Capital Corp. with $3.5M.

Jefferies and Bank of America Merrill Lynch accelerated the commitment deadline on the $370 million first-lien term loan backing GI Partners’ acquisition of Insurity to 3 p.m. ET tomorrow, July 16. Commitments were originally due by Tuesday, July 23. There’s no update to price talk, which is L+400, with a 0% floor and a 99 OID. The seven-year loan would include six months of 101 soft call protection. In addition to the first-lien loan, the financing includes a $40 million five-year revolving credit facility and a $160 million eight-year second-lien term loan that is being privately placed. The transaction is also being financed with about $820 million of equity, according to Moody’s. Pro forma leverage runs 4.7x through the first-lien loan and 6.8x on a total basis. TPG Specialty Lending holds $60.8M in principal amount of the company’s existing 1L debt due October 2020 (L+650).

Jefferies, Barclays and Nomura set talk of L+425-450 with a 0% floor and a 99 offer price on the first-lien term loan tranche of Loparex International’s LBO financing. Second-lien talk is L+850 with a 0% floor at 98.5. The financing backing Pamplona Capital Management’s purchase of Loparex from Intermediate Capital Group includes a $390 million seven-year first-lien term loan with six months of 101 soft call protection and a $160 million eight-year second-lien term loan with 102, 101 hard call protection. There will also be a $50 million five-year revolving credit. The transaction will leverage Loparex at 4.75x first-lien and 6.75x total. Commitments are due at 3 p.m. ET Monday, July 22. The issuer last tapped the market in March 2018 for a $320 million covenant-lite term loan (L+425), proceeds of which were used to refinance debt and repay shareholder loans. As reported, the 2018 refinancing levered the issuer at 4.8x, all senior. Business Development Corp. of America holds $2M in principal amount of the existing 1L debt.

Antares Capital served as sole lead arranger on a $45 million incremental term loan for TA Associates portfolio company Orion Advisor Solutions. Proceeds from the incremental financing will fund an acquisition. The incremental term loan was initially launched as a fungible add-on to the company’s roughly $228 million existing term loan (L+350, 0.75% floor) at an OID of 99. Instead, the incremental loan will be a standalone tranche priced at L+375 with no stepdown, a 0.75% floor and a 99 OID. The incremental term loan will carry 101 soft call protection for six months and will mature concurrently with the existing term loan due May 2024. Orion, formerly known as NorthStar Financial Services Group, was last in the market in May 2018 with the aforementioned first-lien term loan, which was issued at 99.5. The covenant-lite term loan was arranged by Antares, Macquarie Capital and Citizens Bank alongside a $115 million second-lien term loan (L+750, 0.75% floor) to support the purchase of FTJ FundChoice. Holders of the existing 2L debt include BlackRock Capital Investment Corp. with $11M, Business Development Corp. of America with $2.7M and New Mountain Finance with $10.6M.

Houlihan Lokey, KeyBanc Capital Markets and MUFG have outlined price talk of L+475 with a 1% floor on a $100 million term loan B to support a refinancing effort at J.F. Lehman & Co. portfolio company NorthStar Group Services. The six-year term loan B is being put in place alongside a five-year $100 million term loan A and a $60 million revolver, both of which are talked at L+425 and will be tied to a leveraged-based pricing grid. Houlihan Lokey is the left lead arranger and the sole bookrunner on the transaction. KeyBanc is serving as administrative agent, and MUFG is serving as syndication agent. NorthStar is a provider of demolition and remediation services, including nuclear power plant decommissioning. J.F. Lehman acquired the New York-based company in 2017, with M&T Bank providing debt financing to support the transaction. Medley Capital Corp. holds preferred and Class B equity stakes valued at a combined $53.7M.

A Barclays-led arranger group set talk of L+375-400 with a 0% floor and a 99 offer price on the $1.25 billion seven-year first-lien term loan backing Leonard Green & Partners and Ares Management’s acquisition of Press Ganey from EQT. The seven-year covenant-lite term loan would include six months of 101 soft call protection. The buyout will also be financed with $453 million of 9% second-lien notes, which are being placed privately with Goldman Sachs’s merchant banking division and GIC. The notes are NC2.5, followed by a year at 104.5 and then at 102.25, and par. The capital structure will also include a $250 million revolver. Barclays, Citi, Goldman Sachs, J.P. Morgan, BMO Capital Markets and Deutsche Bank are arranging the loan. Issuance will technically be at Emerald TopCo. Holders of the company’s 2L debt due October 2024 (L+650) include Corporate Capital Trust II with $1.1M and Sierra Income Corp. with $2.8M. – Thomas Dunford