The crush of September loan and bond launches finally brought matters to a head in a week that offered the good, the bad and the just plain ugly. In particular, Friday brought deadlines for issuers working high-profile deals, especially those with concurrent bond executions, including LBO deals for Inmarsat, Shutterfly and Sotheby’s. Like a lot of current business, these deals are coming down to the wire — or heading into overtime — as accounts have been loath to commit early as they grapple with the full calendar of as many as 45 transactions on the go all at once.

Predictably, issuers took advantage of demand for secured bonds to take pressure off lagging loan executions in what turned out to be a messy week for several single-B issuers as numerous loan issuers sought to wrap up business. Pricing was dynamic; the prior weeks’ incredibly issuer-friendly flex ratios came into near balance, at seven down to five up; with a few more potential upward moves in the wind heading into this week. The market’s bifurcation yielded both big pricing moves upward, as well as sub L+200 prints for in-demand BB or better credits. Average all-in pricing stats tell the story well: BBs have marched down to L+247 month to date, from L+281 in August, as single B (excluding add-ons) head in the opposite direction, to L+442, from L+397. 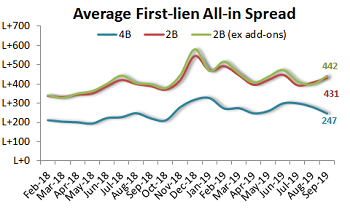 Morgan Stanley, RBC Capital Markets and BMO Capital Markets set price talk of a 97 OID on the $200 million incremental term loan for Culligan, proceeds of which would be used to repay revolver borrowings, fund pending acquisitions and place cash on the balance sheet. The new debt would be fungible with a $70 million incremental term loan issued in early July (L+425, 1% floor). The issuer is offering to reset the 101 soft call protection for six months. Commitments are due by noon ET Friday, Sept. 27. The issuer is returning to market after completing the $70 million incremental loan in early July, proceeds of which were earmarked to repay revolver borrowings and place cash on the balance sheet. That deal priced at 98; it is coterminous, but not fungible, with the borrower’s existing first-lien term loan due December 2023 (L+325), which does not benefit from MFN protection. FS KKR Capital Corp. holds $85M in principal amount of the company’s 2L debt due December 2024 (L+850, 1% floor).

UBS, ING and Madison Capital Funding set price talk on the $370 million of incremental first- and second-lien term loans for Medical Solutions, proceeds of which would support the company’s planned acquisition of C&A Industries. Guidance on the $270 million add-on first-lien term loan is L+425-450, with a 1% floor and a 99 OID. It would be fungible with the borrower’s existing first-lien term loan due June 2024, which will be repriced upward from L+375 to match the spread on the incremental debt. The issuer is offering to reset the 101 soft call protection for six months. Guidance on the $100 million incremental second-lien is L+875, with a 0% floor, offered at 98. The incremental second-lien would be coterminous, but not fungible, with the issuer’s existing second-lien term loan due June 2025 (L+825, 1% floor). The incremental debt would include 102, 101 hard call premiums in years one and two, respectively. UBS is sole lead on the second-lien. Commitments are due Wednesday, Oct. 2.  Holders of the existing 2L debt include Gladstone Capital Corp. with $3M and CION Investment Corp. with $10M.

Credit Suisse and Antares launched an extension of Shearer’s Foods’ $701 million term loan to March 2022, nine months beyond its current maturity. The extension is talked at L+425 with a 1% floor, the same as the existing loan, with a 99.75 OID. The extended loan would carry six months of 101 soft call protection. A lender call was scheduled for 10 a.m. ET Monday, Sept. 23, and commitments are due by noon ET Friday, Sept. 27. The existing covenant-lite term loan due June 2021 was issued in 2012 and amended with the addition of incremental debt in March 2018, a transaction supporting the refinancing of secured notes. Great Elm Capital Corp. holds $5M in principal amount of the company’s 2L debt due June 2022 (L+675).

Credit Suisse set talk of L/E+425 with a 0% floor and a 99 offer price on the $1.75 billion-equivalent cross-border term loan for ION Corporates. The financing also includes a 50 bps pricing step-up if corporate ratings fall below the current B2/B level. Proceeds from the six-year loan would refinance debt at OpenLink, Wall Street Systems and Triple Point Technology, all of which are owned by ION Investment Group. The loan would be denominated in dollars and euros though tranching has not yet been set. Lenders will be offered six months of 101 soft call protection. Apollo Investment Corp. holds $14M in principal amount of Wall Street Systems’ 1L debt due November 2024 (L+500, 2% floor). – Thomas Dunford