Both the leveraged loan and high-yield bond markets wasted no time getting back to business despite August’s tenuous market conditions, with issuers stepping forward last week with a mix of opportunistic and M&A-related transactions. Foreshadowing what is expected to be a busy September, the high-yield market saw its first drive-by execution on the Tuesday after Labor Day in seven years as issuers rushed to capitalize on the plunge in U.S. Treasury yields with heightened trade tension last month, even as it reversed course last week with one of the biggest one-day yield gains in three years.

The loan secondary was on better footing last week after the Credit Suisse Leveraged Loan Index posted a negative 0.28% return in August, its worst monthly performance since December. As the primary revived, the secondary market grinded higher, especially in bonds, despite rising Treasury rates and signs of continued outflows from the asset class. 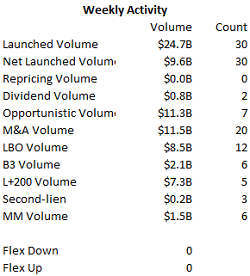 Deutsche Bank, Antares Capital and Madison Capital set talk of L+450 and a 99.5 offer price on the first-lien term loan tranche their loan deal backing Aquiline Capital Partners’ acquisition of CoAdvantage. Second-lien talk is L+850 at 99. The covenant-lite financing is split between a $325 million, seven-year first-lien term loan and a $130 million, eight-year second-lien tranche. The first-lien would include six months of 101 soft call protection and the second-lien would carry 102, 101 hard call premiums in years one and two, respectively. The issuer is also putting in place a $45 million revolver that will be subject to a springing net first-lien leverage test. Commitments are due at noon ET Thursday, Sept. 19. Audax Credit BDC holds $3.7M in principal amount of the company’s existing 1L debt due October 2023 (L+450).

A UBS-led arranger group launched a $195 million incremental first-lien term loan for CPI International, scheduling a lender meeting for Wednesday, Sept. 11. Proceeds will back the company’s acquisition of the SATCOM Technologies antenna systems business from General Dynamics. The acquisition is expected to close by the end of the year. Terms were not disclosed. SATCOM Technologies designs, manufactures and installs satellite communications antenna systems used in commercial, defense and scientific applications, as well as provides related radio frequency products and electronics, including feed components, amplifiers, converters, antenna control systems, and engineering and installation services. CPI International’s existing loans, an originally $470 million first-lien term loan due 2024 (L+350) and a $100 million second-lien tranche due 2025 (L+725), were syndicated in July 2017 to back Odyssey’s acquisition of the business from Veritas Capital. The buyout leveraged the issuer at 4.9x/5.9x, LFI reported at the time. Barings BDC holds $4.8M of the existing 1L debt. Holders of the existing 2L debt include Medley Capital Corp. with $3M and Sierra Income Corp. with $9.9M.

A Credit Suisse-led arranger group this morning launched a $425 million B term loan backing L Catterton’s proposed buyout of Del Frisco’s Restaurant Group, setting a lender meeting for 12:30 p.m. ET on Monday, Sept. 9. The arrangers are circulating price talk of L+700, with a 0% floor and a 97 OID. The seven-year loan would include six months of 101 soft call protection. Credit Suisse, Jefferies, Societe Generale and Citizens are arranging the loan. Commitments are due by 5 p.m. ET Monday, Sept. 23. L Catterton in late June agreed to take the restaurant operator private. The $8-a-share transaction is subject to shareholder and regulatory approvals and is expected to close in the fourth quarter. The sponsor is kicking in $555 million in equity, according to SEC filings; the financing commitment also provides for a $50 million revolver. CION Investment Corp. holds $13.9M in principal amount of the company’s existing 1L debt due June 2025 (L+600).

J.P. Morgan this morning launched an $825 million B term loan backing EQT and Canada Pension Plan Investment Board’s planned acquisition of a majority stake in Waystar from Bain Capital. The seven-year loan is talked at L+425, with a 0% floor and a 99–99.5 OID. Lenders are offered six months of 101 soft call protection. Issuance is technically at Navicure. Commitments are due Wednesday, Sept. 18. EQT and CPPIB in late July agreed to purchase a majority stake in Waystar in a deal valued at $2.7 billion. Closing is expected this year. The transaction will be funded via the term loan, $275 million of privately placed second-lien debt, rollover equity of about $400 million, and a new equity infusion of about $1.2 billion. Leverage is 5.2x first-lien and 6.9x total. Audax Credit BDC holds $3.5M in principal amount of the company’s existing 1L debt due 2024 (L+375). Holders of the 2L debt due 2025 include Business Development Corp. of America with $1.3M, New Mountain Finance with a combined $32M and Oaktree Specialty Lending Corp. with $14.5M.

Antares Capital, Golub Capital and Capital One set price talk of L+400-425, with a 0% floor and a 99–99.5 OID, on the $422 million first-lien term loan backing Genstar Capital’s acquisition of a majority stake in OEConnection. The seven-year covenant-lite loan would include six months of 101 soft call protection. Commitments are due by Thursday, Sept. 19. The issuer is also putting in place a $50 million five-year revolver and a $185 million second-lien term loan, which has been placed privately. Pro forma leverage runs 5.2x through the first-lien debt and 7.5x on a total basis; marketed EBITDA is about $80 million. Bain Capital Specialty Finance holds $11.1M of the company’s 1L debt due November 2024 (L+400) and $6.3M of its 2L debt due November 2025 (L+800). New Mountain Finance holds a combined $15.2M of the 2L debt.