The $945M financing for Integrity Marketing that was put away quickly and quietly last month not only shows how direct lenders continue to log wins for larger mandates, but also the wider premiums they earn bypassing the syndicated market.

Pricing on the unitranche loan that Owl Rock Capital, Crescent Capital and Antares Capital put together for the company closed at L+575, according to sources. That's 150 bps higher than the L+425 on the insurance broker’s previous first-lien debt. It's also well above current averages in the more broadly syndicated market.

According to S&P Global LCD, the average all-in yield is 5.9% across large borrowers this month. With 3-month Libor at 2.14%, that puts the average spread at roughly L+375 for syndicated issuers.

Against other unitranche loans — the tool of choice for many direct lenders —the Integrity Marketing credit is right in the wheelhouse of where the majority of unitranches have priced in 2019, based on data provided by Advantage Data. 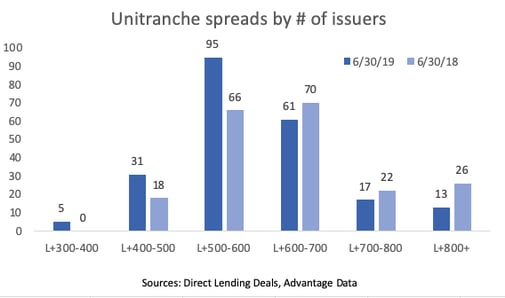 Even though direct lenders benefit from a lack of transparency, there's always the risk of traditional banks swooping in to recut a better deal.

Finance companies have at least one touchy reminder of that possibility: Qlik Technologies.

In 2016, Ares Capital, Golub, TPG and Varagon arranged a $1.075 billion unitranche financing to back the buyout of the analytics firm by Thoma Bravo. It was notable because it was trumpeted as the first large-scale mandate handed to a group of nonbanks.

The arrangers priced it at L+875 at 98.5, with call premiums starting at 105 in year one. They held onto it for a year before Morgan Stanley and Goldman Sachs stepped in to refinance the debt to L+350.

The 525 bps difference offset the formidable call penalties, to give Qlik huge savings on interest going forward. (Since then, Qlik has obtained incremental debt that lifted the spread to L+425.)

Given market conditions are even more competitive than they were two years ago, it’s unlikely Integrity Marketing's arrangers were able to install call premiums as hefty as Qlik's were. That said, unitranche pricing has never been tighter either.

Owl Rock acted as administrative agent, with Crescent Capital and Antares acting as joint lead arrangers. Owl Rock and Crescent split the financing, with Harvest Partners bringing in Antares and about five other lenders, according to sources.

********Coming soon! Direct Lending Deals is a new publication that lifts the curtain on private credit by giving investors and originators the latest news and analysis on terms & trends in the direct lending market, now a $1 trillion dollar asset class. DL Deals focuses on sponsor-driven transactions, the main engine of deal flow in leveraged lending. We tap into 20-year relationships to go deeper on deals, and cover all segments of direct lending including fundraising, BDCs and people shaping the market. Contact kelly.thompson@dldeals.com to join the DL Deals distribution list. Website and formal launch coming next month.********