Investor demand for large transactions such as Ultimate Software and Staples underscored a palpable shift in loan market tone last week as accounts scrambled to commit to the relatively few deals in syndication. A few stragglers aside, numerous deals have accelerated, upsized or flexed lower in recent days, for a lopsided downward-to-upward flex ratio of 7:3. Bonds, meanwhile, plowed forward with oversubscribed new issuance, steady retail cash inflows, and an upside grind in more active trading.

Despite the rosier tone in the asset-starved primary market, there remains a wellspring of caution, what with the PetSmart amendment drama intensifying last week and rumblings of a couple defaults offering a timely reminder that the current crop of deals tend toward the aggressive. 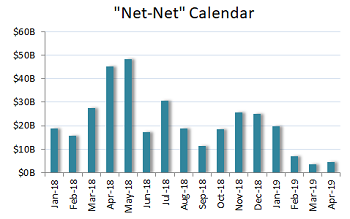 Goldman Sachs, Credit Suisse and UBS set price talk of 99–99.25 on the $205 million add-on first-lien term loan for Barracuda Networks. The incremental debt would be fungible with the borrower’s existing $551 million covenant-lite first-lien term loan due February 2025, which is priced at L+325, with a 1% floor. The issuer is offering to reset the 101 soft call protection on the entire tranche in connection with the transaction. Commitments are due April 10. Proceeds will be used to refinance the borrower’s $205 million second-lien term loan (L+725), which is callable at 101. The originally $555 million term loan and the second-lien were syndicated early last year to back Thoma Bravo’s take-private LBO of the provider of cloud-enabled security and data protection products. The 75 bps of MFN protection has lapsed on the transaction per the deal’s 12-month sunset, though at the proposed guidance the incremental debt is well within the 75 bps of MFN protection; the 2018-vintage loan was issued at 99.75. Oaktree Strategic Income Corp. holds $6M in principal amount of the 2L term debt.

Credit Suisse and J.P. Morgan outlined talk of L+275-300 with 0% floor and a 99.5 offer price on the $350 million DIP term loan for Hexion. As such, pricing is potentially tight to the L+300 level outlined in court filings. The 18-month loan will be governed by a minimum liquidity covenant and include six months of 101 soft call protection. Per the financial covenant, minimum liquidity cannot drop below $35 million at the close of business on any day. Commitments are due by Wednesday, April 17. The DIP financing also includes a $350 million asset-based revolver, which is led by J.P. Morgan, which will be administrative agent on both the term loan and RC. Business Development Corp. of America held $5M of the company’s prepetition 1L 6.625% notes due April 2020, $10M of its 10% notes due April 2020 and $5M of its 10.375% notes due February 2022.

BNP Paribas launched a $20 million add-on to Kettle Cuisine’s first-lien term loan. The add-on is offered at 99.5 and would be fungible with the $266 million first-lien term loan due 2025 (L+375, 1% floor) that was put in place in August 2018. Commitments are due today. Last year’s deal also included a $69 million second-lien term loan that was placed privately. Proceeds funded Kettle Cuisine’s merger with Bonewerks, both of which were portfolio companies of Kainos Capital with a new investment from the sponsor’s fund II. Audax Credit BDC holds $2M of the company’s existing 1L term debt.

Jefferies, Macquarie and Antares outlined price talk of L+425-450 at 99 for the $300 million first-lien term loan strip supporting Leonard Green & Partners’ buyout of Wrench Group from Investcorp. Commitments are due Friday, April 12. Terms includes two 25 bps leveraged-based stepdowns. The $225 million funded tranche and a $75 million delayed-draw component are being sold as a strip. The delayed-draw term loan will be available for 24 months with no ticking fee for days 0 to 45, a fee of half the spread for days 46 to 90, and a full-spread fee for day 91 and beyond. The issuer is levered at nearly 4.8x through the first-lien debt and 6.4x on a total basis. The seven-year first-lien debt is being put in place alongside a $45 million revolver and a $75 million second-lien term loan that is being privately placed. Crescent Capital BDC held $4.7M of the company’s existing 1L debt (L+450) due December 2024. — Thomas Dunford